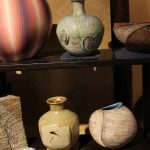 END_OF_DOCUMENT_TOKEN_TO_BE_REPLACED

Tsuji Seimei (1927-2008) made a lot of work in his lifetime yet surprisingly few tsubo-jars, as a matter of fact at the 2017 major Tsuji retrospective held at the Museum of Modern Art, Tokyo, Crafts Gallery out of 152 displayed pieces there were only two tsubo and one was a lidded one. So here are… END_OF_DOCUMENT_TOKEN_TO_BE_REPLACED 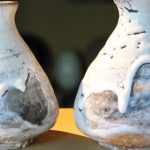 Suizu Kazuyuki drove up from Hagi today and RYYG selected some very fine sake vessels–and three larger jars (including Chosen-Karatsu) recently made. Suizu(b.1960) started his career in 1982 and has mainly exhibited at major national department store galleries such as Mitsukoshi and Tenmaya…. END_OF_DOCUMENT_TOKEN_TO_BE_REPLACED 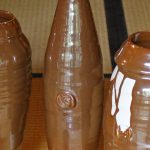 Four iron-glazed jars by the legendary Koie Ryoji (b.1938), one of the world’s most important 20th century ceramic artists, new to the gallery today. The smallest is 32.cm. tall and all are in perfect condition with signed boxes. More details photos on request.
END_OF_DOCUMENT_TOKEN_TO_BE_REPLACED 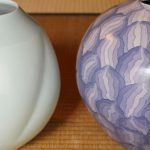 Here are two jars by two important ceramic artists; a seihakuji bluish-white porcelain by Fukami Sueharu(b.1947) and a neriage marbled one by Matsui Koyo(b.1962). Each is very uniform all around in terms of glazing and design, both better in person in terms of color. The Fukami is… END_OF_DOCUMENT_TOKEN_TO_BE_REPLACED 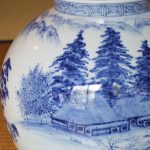 Kato Gozan(b.1922) was influenced by his Meiji teachers and is renowned for his skill with a brush painting masterpieces in cobalt blue-gosu on his works. Here is a very varied scenic Kato tsubo-jar that with every turn takes on a new vista. In perfect condition, signed box, signed on base,… END_OF_DOCUMENT_TOKEN_TO_BE_REPLACED 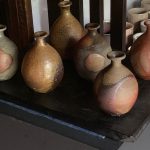 We’ve offered Fujiwara Kei tokkuri-sake flasks in the past yet never six at one time from a private collection. They are all top-notch, please see photo captions for prices; these include signed boxes. Fujiwara Kei(1899-1983) was named a LNT in 1970. Additional photos of any gladly sent on… END_OF_DOCUMENT_TOKEN_TO_BE_REPLACED 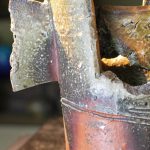 Koide Naoe we first met when he was an apprentice to Harada Shuroku, that lasted from 1997 to 2011 when he established his own kiln. He was born in 1978 and has a deep affection for Bzen clay and creates works with rich firing much in the style of Harada. Here is a dynamic ‘bucket’ vase… END_OF_DOCUMENT_TOKEN_TO_BE_REPLACED