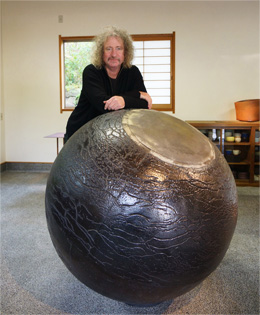 Robert Yellin is the host of this eGallery and its sister site e-Yakimono.net (pottery knowledge center). Yellin has resided in Japan since 1984. He writes regularly on Japanese ceramics in numerous publications. For ten years he wrote columns for the Japan Times, the largest English newspaper in Japan. For archives of his stories, click here. He has also written for Daruma magazine, and was a former columnist for Honoho Geijutsu, a leading quarterly devoted to contemporary Japanese ceramics. His articles have also appeared in Asian Art Newspaper. Yellin is the author of Yakimono Sanka published by Kogei Shuppan, a book (in Japanese) about sake utensils that was recommended by the Japanese Library Association for inclusion into all public libraries. The English version of this book is available for online purchase.

Stories by Robert have also appeared in WINDS magazine and in Ceramics Art and Perception. Robert is a member of the Japan Ceramics Society (Nihon Toji Kyokai) and his articles have appeared in its monthly publication Tohsetsu.

Robert is available to give lectures and lead tours dealing with Japanese ceramics. He is likewise available to request commissioned work.