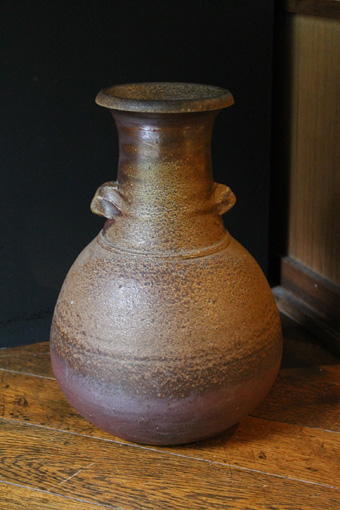 Fujiwara Yu(1932-2001) was the fourth Bizen potter to be named a Living National Treasure, that was in 1996. His father, Kei, was also a LNT, the second for Bizen, first was Kaneshige Toyo, third was Yamamoto Toshu and now we have Isezaki Jun. Yu had his own special forms, usually bold and tight, and that can be seen on this vase with textured natural-ash glaze (goma) and the Fujiwara shiso-purple firing: one reason this was selected is also the movement in the ‘ears’–like wings. In perfect condition with a signed box, 31.2cm.tall and 22cm.wide, signed on base, EMS included.