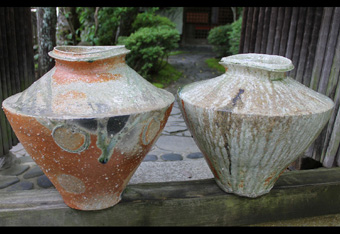 Tsujimura Kai (b.1976) creates grand Shigaraki, Iga, Karatsu and Kohiki pieces in line with the aesthetics of his famous father Tsujimura Shiro. Kai, along with his brother Yui, are quickly making a name for themselves in the Japanese pottery world. Deep yet simple, Kai’s works carry a sincere understanding and reverence for traditional Japanese aesthetics -in other words, he is far “older” than his age belies. Here are two natural ash-glazed tsubos-jars where the broad shoulders allow for a rich landscape of ash and clay. Both in perfect condition with a signed wooden plaque, signed, 34cm.tallx37.3cm. and 37cm.tallx37.6; each has a copper insert for flowers. Right Sold