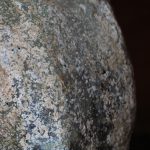 “Koyama Kiyoko(b.1936) was born far from Shigaraki in Nagasaki prefecture; she came to Shigaraki when she was eighteen and then spent some time in Kyoto studying about Kenzan and sometsuke blue and white wares. At the age of twenty-seven she decided to pursue Shigaraki and thus entered a very… END_OF_DOCUMENT_TOKEN_TO_BE_REPLACED 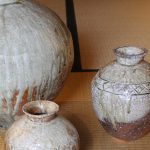 Kishino Kan (b.1975, Kyoto) lives and breathes ceramics in the hills of Iga. Not just Iga though he also fires Shino, Kohiki, Ki-Seto, Setoguro, Hakuji-White Porcelain and other styles; he’s a great admirer and connoisseur of ancient ceramic art. A pure spirit comes out his his adaptations of… END_OF_DOCUMENT_TOKEN_TO_BE_REPLACED 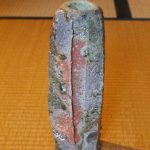 So here’s the story on this Mitsukoshi exhibition card Furutani Kazuya (b.1976) vase, obviously he favored it as to have it as the featured work for a main exhibition. A man saw it on the card and called the gallery, yet the gallery didn’t get his name, in the meantime quite a few… END_OF_DOCUMENT_TOKEN_TO_BE_REPLACED 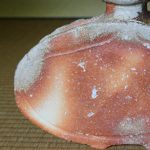 Furutani Michio (1946-2000) was a Shigaraki-Iga ceramic artist of the highest level, he’s sadly missed. RYYG is always looking for his better works and especially in his original henko-rounded shoulder form seen here; a major portion of a ceramic magazine here in Japan was devoted to him and… END_OF_DOCUMENT_TOKEN_TO_BE_REPLACED 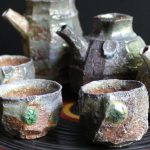 From a recent Kato anagama firing some new sake vessel forms for him, those being the heavily faceted katakuchi, each with a fine firing and each hold a little over 250ml, perfect condition, signed boxes, signed on base.
The far left guinomi is available and photos gladly sent on request.
END_OF_DOCUMENT_TOKEN_TO_BE_REPLACED 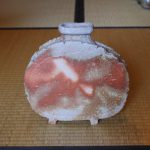 It is with great honor that we’ll be offering many works of Furutani Michio (1946-2000) directly from the Furutani Family Collection, a first ever. All the works will be listed sometime next week—One large kame and tsubo, mizusashi, chawan, tokkuri, katakuchi, yunomi, guinomi, and koro…. END_OF_DOCUMENT_TOKEN_TO_BE_REPLACED 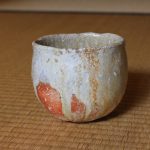 Furutani Kazuya (b.1976) creates Shigaraki chawan in many forms, here a full-rounded one in the guise of the great Honami Koetsu. The contrast of jewel-like natural ash-glaze and Furutani’s crisp ‘hi-iro’ fire color is very engaging, as is the ‘pool.’ In perfect… END_OF_DOCUMENT_TOKEN_TO_BE_REPLACED