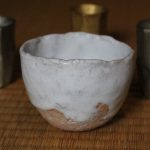 Ogawa Machiko (b.1946) is a very influential potter in the contemporary Japanese ceramic scene, as many know. In a past ceramic art journal here in Japan she was also named one of the top 50 ceramic artists in Japan today. Here are four of her sake cups, two in a platinum glaze, one in a gold-glaze… END_OF_DOCUMENT_TOKEN_TO_BE_REPLACED 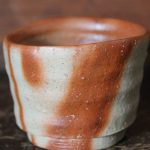 Kaneshige Sozan (1909-1995, real name Shichirozaemon) played many roles throughout his long career, the first beginning when he was 18. That’s when he started to help his already famous elder brother Toyo (1896-1967)– who in 1956 was designated a Living National Treasure for Bizen ware… END_OF_DOCUMENT_TOKEN_TO_BE_REPLACED 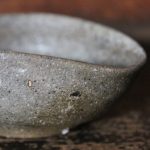 Dating 800 years old here is a large-sized Kamakura period sake cup with an oval form, some natural-ash glaze remaing and a ishihaze stone-burst on the base. In very good condition, 4.2cm.tallx11x9. Shown with a Meiji period Mingei katakuchi, 28,000 yen.

END_OF_DOCUMENT_TOKEN_TO_BE_REPLACED 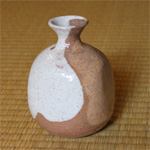 Okada Yu (b.1946) is a celebrated Hagi potter who was designated a Yamaguchi Prefectural Intanglible Property in 2006 for his innovative Hagi approach with glazes and slips. Here is a smaller work illustrating that and also unusual in its square form. In perfect condition with a signed box,… END_OF_DOCUMENT_TOKEN_TO_BE_REPLACED