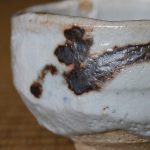 Kukuri, Kani, Okaya, and Ohira are the names of places in Gifu prefecture where the classic Shino wares of the late 16th C. were fired; the greatest kiln being that of Mutabora. The relationship between Shino and the Way of Tea has basically continued on to this very day. Of course there was a… END_OF_DOCUMENT_TOKEN_TO_BE_REPLACED 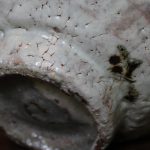 One of the most gifted potters and scholars Japan has ever known was Arakawa Toyozo(1894-1985). He was named a Living National Treasure in 1955 for Shino and Black Seto. He also was associated with some of the other greatest potters of his day including Miwa Kyusetsu, Kawakita Handeshi, Kato… END_OF_DOCUMENT_TOKEN_TO_BE_REPLACED 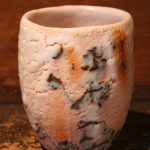 Kato Kozo(b.1935) is a Mino potter in the purest sense. He does many things the old way, like his stick-turned wheel and Momoyama period style kiln, and the way he handles himself; humble, sincere, natural, and confident. This character also comes out in his works, which have earned him a sterling… END_OF_DOCUMENT_TOKEN_TO_BE_REPLACED 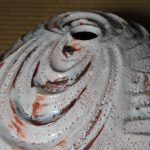 Arimoto Kuugen (b.1963) is a Hiroshima-based Shino specialist–he gets all his materials from Mino–who is also creating some wonderful green ash-glazed works like that of Ezaki Issei (1918-1992). Recently Arimoto has been sculpting flowing-rippling vessels in both glazing schemes; mainly… END_OF_DOCUMENT_TOKEN_TO_BE_REPLACED