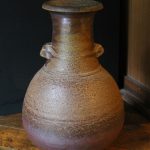 Fujiwara Yu(1932-2001) was the fourth Bizen potter to be named a Living National Treasure, that was in 1996. His father, Kei, was also a LNT, the second for Bizen, first was Kaneshige Toyo, third was Yamamoto Toshu and now we have Isezaki Jun. Yu had his own special forms, usually bold and tight,… END_OF_DOCUMENT_TOKEN_TO_BE_REPLACED