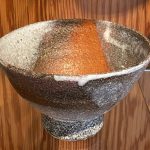 We do miss seeing Mt.Fuji, as many know our gallery before was in Mishima with views of Mt.Fuji, ever changing, always inspiring. So it was splendid to view a Red Fuji in this chawan by Nishihata Tadashi, more about this important Tamba ceramic artist in our archives. It’s in a deep well Ido… END_OF_DOCUMENT_TOKEN_TO_BE_REPLACED 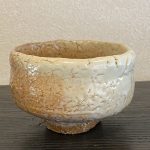 Here are some new works to the gallery in the recent weeks, please see names under the photos and more details gladly sent on request. The first is a Hagi chawan by Living National Treasure Miwa Kyusetsu XI (1910-2012), double boxed and etched with his signature on base meaning made after he was… END_OF_DOCUMENT_TOKEN_TO_BE_REPLACED 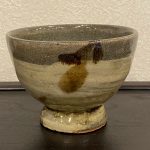 A first for RYYG, a *stamped*(田) Hamada Shoji chawan dating to Showa 9(1934), box signed by son Shinsaku and noted as well there, first kiln firing. This is an extremely rare chawan and talked with grandson Tomoo about it, agreed and said his father did the calligraphy about twenty years ago. In… END_OF_DOCUMENT_TOKEN_TO_BE_REPLACED 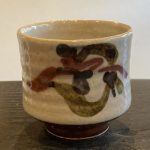 One of Japan’s greatest ceramic artists in all of history, Kawai Kanjiro (1890-1966). It’s mind-boggling that he’s not as well known in the West as Hamada. If ever visiting Kyoto his home is a must visit, more info online on this most important–and special–artist. Here is a lovely… END_OF_DOCUMENT_TOKEN_TO_BE_REPLACED

The current issue of Tohsetsu–the Japan Ceramic Society’s journal–has on the cover a Hamada Shoji work and the main feature of the issue is the relationship of Hamada with Bernard Leach and fellow Mashiko potters. The Hamada photo courtesy of Tohsetsu. Here is a fine Hamada… END_OF_DOCUMENT_TOKEN_TO_BE_REPLACED 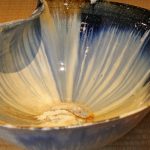 Kimata Kaoru(b.1967) studied in Karatsu and there mastered various ash-glazes and then made them into her own ‘blend’ as clearly seen on this multi-colored-engaging vessel. Kimata moved her studio to Kobe in 1995 and also to the countryside. She exhibits throughout Japan–and her chawan… END_OF_DOCUMENT_TOKEN_TO_BE_REPLACED 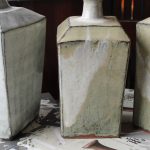 Inoue Taishu(b.1941) is a legendary Shodai potter located in Kumamoto prefecture. He studied in Kyoto with Morino Kako, father of Taimei, and then established his own kiln in 1965 before moving to his present location in 1968. His met all the Mingei greats of the day and is, of course, one himself…. END_OF_DOCUMENT_TOKEN_TO_BE_REPLACED 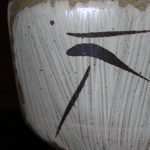 Here is a Shimaoka Tatsuzo(1919-2007) work that caught our attention with its strong form and subtle bamboo sparse lines on a white slip hakeme ‘curtain’ that reminds us of Shinoda Toko’s brush as well. In perfect condition, 27.5cm.tallx19.5cm., stamped on base, stamped on base.
END_OF_DOCUMENT_TOKEN_TO_BE_REPLACED 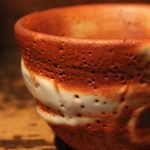 Here is a bold aka-Shino guinomi by Living National Treasure Suzuki Osamu(b.1934). In perfect condition with a signed box.
END_OF_DOCUMENT_TOKEN_TO_BE_REPLACED 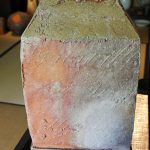 Kato Katsuya(b.1947) was born into an ancient potting family in the town in Nishio, not far from one of Japan’s most important potting centers from long ago, Seto in Aichi prefecture. His specialty is yakishime–high fired unglazed stoneware–and since 2005 has been firing an… END_OF_DOCUMENT_TOKEN_TO_BE_REPLACED