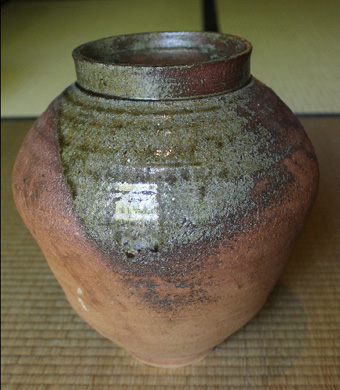 Kamoda Shoji (1933-1983) was one of the most influential potters of post-war Japan. He brought new meaning to “decorative ceramics” with extraordinary and imaginative designs. His following was so great that his shows would sell out in 15 minutes (one supposed record), and the lines to the exhibitions would wind down the stairs of an entire department store. He was the “rock star” of Japanese ceramics, not only because of his trendy, fashionable designs, but also because of his premature death at the age of 50 -what could he have made if he had lived longer? In the early stage of his career he was making stoneware with ash-glazes and this is a rare example that dates to 1966, very similar in clay and tonality to the one shown in a retrospective catalog,photo here too. In excellent condition–superficial-firing crack on base–with a signed box by a former collector, 29cm.tallx26.1.