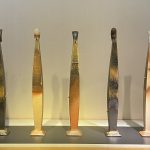 Exhibited at Kakurezaki Ryuichi’s major Osaka exhibition last year and in the catalog, this magnificent set of contemporary art/ceramic sculpture that belongs in a museum. Each is 106cm.tall and sold as a set.
END_OF_DOCUMENT_TOKEN_TO_BE_REPLACED 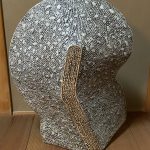 Light of Dawn by Kobayashi Hideo

This is a major work by Kyoto ceramic artist Kobayashi Hideo(b.1951) as it was exhibited at the Tokyo Metropolitan Museum, Furukawa Museum, Nagoya and the 30th annual Sokokai recently in Kyoto. It’s also shown on the Nikkoukai Directors page that can be seen here, scroll down: … END_OF_DOCUMENT_TOKEN_TO_BE_REPLACED 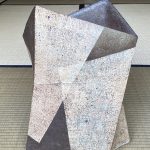 Shimizu Keiichi (b.1962) is a fourth generation Tamba potter creating minimalist geometrical forms often with graphic art designs; this work was hand-coiled formed and then manipulated into its origami-looking facade. It’s 46cm.tallx28.3cmx14, signed on base and with a signed box.
END_OF_DOCUMENT_TOKEN_TO_BE_REPLACED 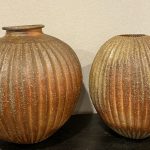 How wonderful that Takahashi Yoshiko(b.1988) became a ceramic artist in her family’s Shigaraki tradition. Her father is Rakusai V and of course she grew up with clay all around her entire life. Our gallery is a big fan and here are two recently fired jars with her signature fluted forms and… END_OF_DOCUMENT_TOKEN_TO_BE_REPLACED 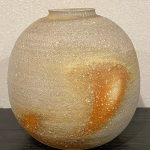 Otani Shiro(b.1936, now known as Otani Mugen) is a veteran Shigaraki ceramic artist who was named a Shigaraki Intangible Cultural Property in 1990. Here is an Otani tsubo-jar we selected for the subtle yet rich textured ash glaze combined with his renowned ‘fire color’ hi-iro tones. In… END_OF_DOCUMENT_TOKEN_TO_BE_REPLACED 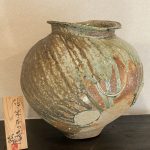 Tsujimura Kai (b.1976) creates grand Shigaraki, Iga, Karatsu and Kohiki pieces in line with the aesthetics of his famous father Tsujimura Shiro. Kai, along with his brother Yui, are quickly making a name for themselves in the Japanese pottery world within and outside of Japan. Deep yet simple,… END_OF_DOCUMENT_TOKEN_TO_BE_REPLACED 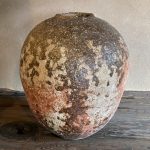 Always challenging his ceramic art Furutani Kazuya(b.1976) has come up with a new style where he plasters different colored clay over his jar forms; one similar one of ours was featured in a recent major publication of 150 of Japan’s noted artists, photos also shown. This very engaging and… END_OF_DOCUMENT_TOKEN_TO_BE_REPLACED 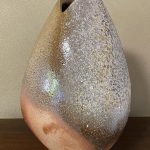 As many know Kakurezaki Ryuichi(b.1950) is a revolutionary Bizen ceramic artist. If not familiar with him please do a quick web search, he was named an Okayama Intangible Cultural Property in 2019. This unique form was fired this spring and has beautiful natural ash-glaze, warm ‘clay… END_OF_DOCUMENT_TOKEN_TO_BE_REPLACED 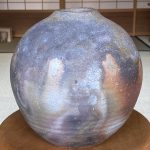 Bizen ceramist Fujiwara Ken (1924-1977) has to rank as one of our all-time favorite potters in Japan. His pieces are poetry to me. I often wonder what happened to Fujiwara, as he passed from this world in his early fifties, fond of sake. Kaneshige Toyo (1896-1967), Bizen’s first Living… END_OF_DOCUMENT_TOKEN_TO_BE_REPLACED

Positioned in a strategic spot while loading the kiln, this vase was then plucked from the height of firing and allowed to cool rapidly and thus gray and green natural ash-glaze on this Sawa Kiyotsugu vase. Sawa (b.1948) is known for his attacking approach to the rough clay, ripping and tearing it,… END_OF_DOCUMENT_TOKEN_TO_BE_REPLACED