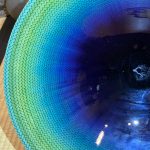 Some of the more interesting Kutani glazes throughout history have come out of the Tokuda kiln. The third generation Tokuda Yasokichi lll (1933-2009), born Masahiko, was designated a ‘Living National Treasure’ for his mastery of Kutani glazes in 1997. In Kutani pottery the five colors… END_OF_DOCUMENT_TOKEN_TO_BE_REPLACED 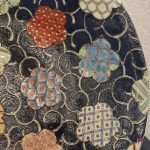 Kawai Atsuko is a veteran Kyoto overglaze enamel master of design; her works are lightweight and a delight to view and hold. The time it took to draw the designs on all her works is staggering. Her list of exhibitions is long indeed usually at specialized art galleries. Here is a lovely… END_OF_DOCUMENT_TOKEN_TO_BE_REPLACED 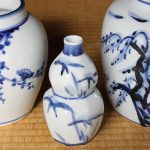 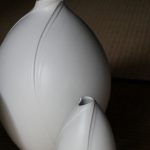 There’s a lovely elegance to the pure white porcelain works of Shomura Hisaki (b. 1974) of which we offer some for the first time here at RYYG. Shomura comes from a long line of Arita potters and is one of the leaders in bringing Arita wares to a more contemporary sculptural approach. Here in… END_OF_DOCUMENT_TOKEN_TO_BE_REPLACED 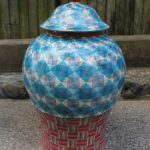 Watanabe Kunio (1967) graduated from the Tokyo University of The Arts where he studied under Celadon Living National Treasure Miura Koheiji (1933-2006). Watanabe’s chosen style is not celadon though, yet overglaze enamel designs that are multi-colored and prismatic. He bisque fires first then… END_OF_DOCUMENT_TOKEN_TO_BE_REPLACED 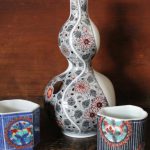 Porcelain fit for a feudal lord, in fact in the early days that’s who Nabeshima was made for. Now the fourteenth generation heads the kiln and in 2014 the current generation Imaemon Imaizumi(b.1962) became the youngest person ever to be designated a Living National Treasure for his Nabeshima… END_OF_DOCUMENT_TOKEN_TO_BE_REPLACED